Last week, CalVet Secretary Vito Imbasciani and Deputy Secretary for Veterans Services Keith Boylan attended the mid-winter conference of the National Association of State Directors of Veterans Affairs in Washington D.C. They were presented with the 2019 Abraham Lincoln Pillar of Excellence Award in Innovation from the U.S. Department of Veterans Affairs for the California Transition Assistance Program, known as CalTAP.

Beginning in 2017, CalVet implemented a first-of-its-kind, state specific transition program for service members, veterans, and their families. Working closely with federal, state, local, and non-governmental partners, CalTAPs goals are to inform and connect veterans of all eras to their earned federal and state benefits, maximize service delivery post separation through community based partners, and provide continued support and assistance to veterans and their families as their needs change over time.

“It’s an honor to see CalTAP earn such a prestigious award,” Outreach Director Roberto Herrera said. “This program has become an essential piece in educating service members, veterans and their families on how to connect with a statewide community-based system of care. We at CalVet are proud of the hard work and dedication our outreach staff and collaborative partners have done to ensure California’s veterans are successful in their civilian lives.” 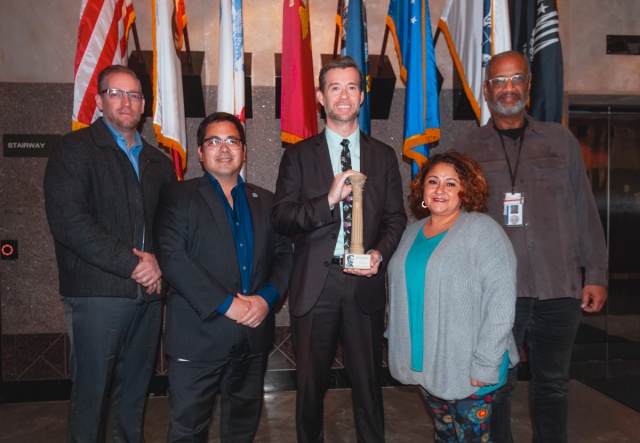 Members of the CalTap team welcome the 2019 Abraham Lincoln Pillar of Excellence award back to Sacramento and CalVet Headquarters. In this photo, from left, are Josh Zebley, Roberto Herrera, Keith Boylan, Angela Frank and Robert Hammond.

With support from the State of California Governor’s Military Council, CalTAP is now being offered at more than 20 military installations throughout the state.  From Beale Air Force Base in Northern California to Camp Pendleton in San Diego, CalTAP has assisted thousands of transitioning service members, veterans, and their families in calling California home.

For more information, or to ask a question, email us at CalTAP@calvet.ca.gov.