Annual Memorial Day Event at Igo is a proud tradition

More than 500 people are expected to attend  the 12th Annual Memorial Day Ceremony at CalVet’s Northern California Veterans Cemetery in Igo. The event has become a proud tradition for staff and the local community.

“Memorial Day is a time to honor all of the men and women who made the ultimate sacrifice while defending our country and our freedoms,” said Mark George, cemetery manager. “I think this is an important time to pause and reflect, not only on all those who have been lost, but also on the role they played to ensure a better future for the rest of us.”

The event begins at 5:55 p.m. Monday, May 28, and will include a flyover, music by a local high school band, bagpipers, rifle volleys and the playing of Taps. Rear Adm. Jerry Ellis, U.S. Navy, Ret., will be the keynote speaker and the pledge of allegiance will be led by Wilfred Sealand, U.S. Army WWII veteran and Battle of the Bulge and German POW survivor. 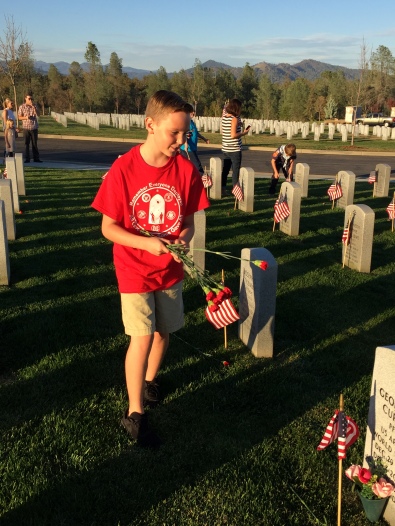 Flags will be placed on each gravesite this Friday, May 25. Local student Preston Sharp will lead efforts to place the flags. Sharp was recently recognized by President Trump for his volunteer work to place flags on veterans’ gravesites.

The Igo event is one of many opportunities Californians will have to pay their respects to the men and women who died while serving in our military.

From the 129th Annual Memorial Day Ceremony at the Los Angeles National Cemetery to the El Dorado County event at the County Veterans Memorial in Placerville to the Reading of the Names in Sacramento on May 27, you can find many more events on our CalVet calendar.

These events continue a long tradition of honoring the American service members who died during wartime.

The custom of marking this day originated just after the Civil War to help heal the wounds of war. Americans in all parts of the country began decorating the graves of the dead. As a small step toward reuniting a divided nation, people chose to honor all the dead – Union and Confederate soldiers alike. After the First World War, this observance was expanded to honor all Americans who fought and died in any of our nation’s wars.