Every year on September 11th, we remember and honor the 2,977 people who were killed during the attacks on that day in 2001. Today, on the 16th anniversary of 9/11, Governor Edmund G. Brown Jr. issued a proclamation declaring today Patriot Day in California and ordered all flags at state buildings to be flown at half-staff.

“Each year since those terrible events, we have observed September 11th as Patriot Day to honor both those who lost their lives and the men and women who showed such bravery in responding to the attacks and aiding the victims,” the proclamation states.

This morning, public safety officials, veterans and community members gathered for a ceremony of remembrance at the September 11th Memorial at the California Exposition and State Fair. The memorial is open to the public today from 7 a.m. to 4 p.m. Parking is free.

Rick Pickering, CEO and General Manager of the California Exposition and State Fair, opened the memorial to the public, saying this is a day for remembrance and reflection.

“We shall not forget,” said Julie Baumgartner, who officiated the ceremony. She is commander of the Veterans Affiliated Council (VAC) and military reservist with the California National Guard. “This is something that was devastating to our country. That’s what we’re in uniform for – to protect our country and the citizens of the United States.”

“This is a day for citizens and veterans to reflect and value what was lost that day,” said Phil Rios, past commander of the VAC and a U.S. Army combat veteran who served in Vietnam and Desert Storm. 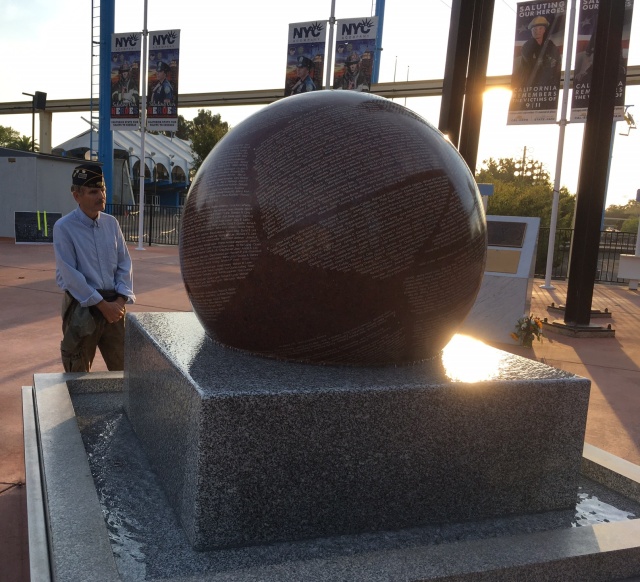 Don Harper, a Marine veteran who served in Vietnam, reflects at a remembrance ceremony at the Cal Expo September 11 Memorial Plaza.

The death toll from 9/11 goes beyond those killed in New York City, Washington, D.C. and outside of Shanksville, Pennsylvania. In the years since, many more first responders, recovery workers and survivors have died from cancers and other diseases linked to their exposure to toxic dust and hazardous substances during and after the attacks.

The memorial at Cal Expo features a fountain including a granite sphere inscribed with all of the names of the September 11 victims, as well as a carillon bell tower, reflections of the World Trade Center, and individual memorials to American Airlines Flight 77, which crashed into the Pentagon, and United Airlines Flight 93, aborted in a field in Pennsylvania.

Construction of the Cal Expo memorial began a year after the attack, when Cal Expo board member Larry Davis personally acquired and donated 125,000 pounds of wreckage from the World Trade Center. A massive I-beam extracted from Ground Zero, which had been a horizontal support beam from the North Tower, was among the debris. Davis personally arranged for the wreckage to be shipped via rail to California.

Members of the public are welcome to visit the September 11 Memorial until 4 p.m. today, at Cal Expo, 1600 Exposition Blvd. Follow the signs for parking and entrance to the memorial.