Aptly nicknamed the Lady Tiger, Dorothy Gotlieb Picotte was a fierce multi-sport competitor in high school, a determined young woman in the military, and remains a fiery and beloved member of the Veterans Home of California – Redding to this day.

Picotte grew up in the East Los Angeles suburb of El Sereno. She played basketball, volleyball and tennis at Abraham Lincoln High School, where she first earned her nickname.

Following her dad’s footsteps and military career at sea, Picotte carved her own path to the Navy, enlisting as a Yeoman 2nd Class in 1939. 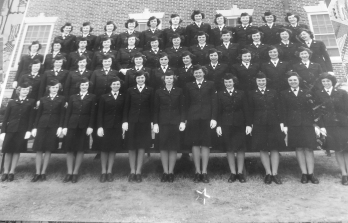 Upon enlistment, the Navy recognized Picotte’s leadership qualities and made her a platoon leader. Quickly, she became an enforcement officer for a 45-woman platoon and her leadership skills were on full display.

In 1944, at the request of President Franklin D. Roosevelt and his staff, Picotte and her platoon were requested for a formation march down Fifth Avenue in New York City. To this day, that is still one of Picotte’s finest memories of her time in the military.

Later assignments included stints at Oklahoma A&M, where she recalls, “they raised their own beef and served it in the mess hall,” and she spent a few years at the US Naval Advancement base in San Bruno.

Dorothy Picotte (left) enjoys a night on the town with her brother (middle) and her best friend and fellow Navy enlistee Joyce (right).

Happy to be back in California, Picotte ended up studying Naval Terminology and was assigned to the personnel office as a manager. She tracked leave time for each office on the base and quickly became very familiar with Mills Field, which today is known as San Francisco International Airport.

When World War II ended in 1946, the Lady Tiger was called to Treasure Island for official discharge from the Navy.

Upon discharge, Picotte committed to going to work for Graybar Electric, a Fortune 500 company, specializing in supply chain management services, but not before earning a little time off and a trip to Catalina Island to visit her parents. That’s where she met her future husband – a retired Marine named Jim, and the first man to ever ask her to dance.

Jim Picotte (left) and Dorothy Picotte pose for photos in their uniforms.

That opportune meeting developed into 73 years of a happy marriage as the couple wed not long after that first dance.

The couple later welcomed a pair of sons and a pair of daughters to the world, and it didn’t take long for Dorothy to explain her ‘Lady Tiger’ nickname and share her childhood stories with them. At the top of the list are her stories of the president’s parade request and her perfect dance with Jim.

Today, Dorothy resides at the Veterans Home of California – Redding, where she says, “They treat me like Queen Elizabeth.”

The Veterans Home in Redding is a 150-bed, long term care facility located in the heart of the beautiful Northern Sacramento Valley. The Home provides veterans with two levels of care including residential care and skilled nursing care.