There’s nothing better than seeing our veterans earn praise and recognition from those they admire.

Several of our residents from our Northern and Southern California Veterans Homes had the opportunity to meet and share stories with some of their team’s favorite players this month during three special events. 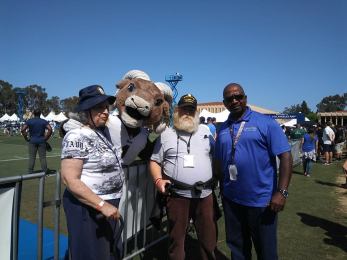 On Aug. 2, a handful of residents from our West Los Angeles Veterans Home were treated to a field-level view of training camp with the Los Angeles Rams. The team’s special guests got to meet Rampage the mascot and watch a practice session before returning home.

The Rams also sent cheerleaders to the Veterans Home on July 27 to greet and take photos with residents. Check out the full gallery on our Facebook page. 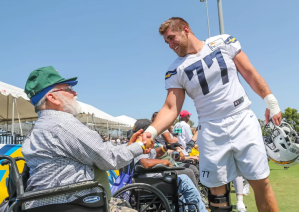 Residents had front-row seats to Chargers camp this week and had the chance to meet players after practice.

Our West LA residents and staff then had a chance to be recognized at the Los Angeles Chargers camp on Aug. 15. Check out their recent trip to meet players and staff in Los Angeles here.

Up north, the Oakland Raiders hosted a meet-and-greet event Aug. 7 at the California Veterans Home in Yountville where they distributed free gear and signed autographs for residents. Former players Vance Mueller, Jerry Robinson, and Bob Rosenstiel met with numerous veterans inside the home’s cafeteria and shared stories from the gridiron to the battlefield. 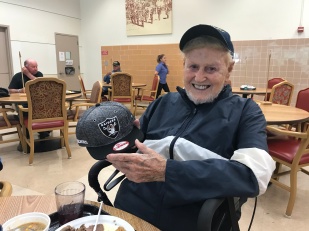 Yountville residents received signed hats and got to share stories with former Raiders players this month.

The players took photos with residents, autographed hats, and distributed them to veterans around the room, spending over an hour with the group of eager fans. The players then presented the home with a No. 24 Willie Brown jersey as a donation to the Home.

Brown, a Hall of Fame cornerback, played with the Raiders from 1967 until his retirement in 1988. His jersey will be displayed inside the Yountville Home’s member services center.

Check out the full Raiders visit in the video below.