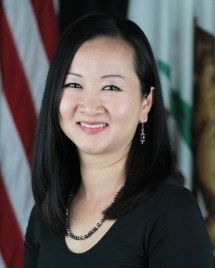 Thuy Mascorro, administrator of the California Veterans Home in Chula Vista, was named Women of the Year by Assemblywoman Lorena Gonzalez Fletcher.

She received the California State Assembly’s 80th District “Woman of the Year” Award last Wednesday, April 4. Mascorro was nominated for her work at the veterans home and in the community. She began working at the home in 2009, serving as Human Resources manager and compliance officer before being named administrator in November 2016.

“It was the opportunity of a lifetime, to take some of the ideas I had and see if we could implement them and make a difference,” said Mascorro. “I wanted to make this place the best it can be.”

“I was floored. I didn’t expect anything like this,” she said. “Through hard work, patience and a commitment to excellence, you can achieve your goals.”

Since Mascorro took the helm in Chula Vista, the veterans home has increased its quality rating from the Centers for Medicare and Medicaid Services (CMS) to five out of five stars. She has met with residents to get their input on issues and concerns, created an employee appreciation committee to improve staff morale, and helped rally military and community volunteers to donate to the home, spruce up the landscaping, wash windows, de-clutter residents’ rooms, and serve meals to residents.

Mascorro is a member of the Chula Vista Veterans Home Support Foundation (CVVHSF), a local non-profit that raised $19,000 for the veterans home last year. The home also raised close to $10,000 through their annual Veterans Walk hosted by the VFW 2111.

“The veterans home is considered a gem in the community.”