A golden eagle, 13 red and white stripes, a matching number of stars and a simple, two-word slogan – “Veterans First” – has come to epitomize James Jungroth’s deep appreciation for veterans in America.

It’s a simple ideology, to put veterans first in life, but it’s one that Jungroth takes great pride in and it’s taken him on a 1,300-mile journey throughout California.

“‘Veterans First’ means we need to care for them first. They take priority because they have sacrificed the most,” Jungroth explained.

Beginning last year on the Fourth of July, Jungroth set out to create something special to honor those who have worn our nation’s uniform, and the result was a patriotic red, white and blue design honoring our veterans.

“My family served in the military, all the way back to World War II as paratroopers, so this is close to the heart for me,” Jungroth stated.

The design focused on a picture of a golden bald eagle, which was originally crafted from redwood and gilded in gold.

“A lot of veterans will come up and say, ‘I’ve seen that eagle before,’ and it brings some of them to tears,” Jungroth explained. “To me, it’s the best American eagle I’ve ever seen in my life.”

Designed and created in 1935 by veteran William E. Kneass Jr., the symbolic eagle artwork spoke to Jungroth when he first located the bird at an American Legion post in Carmel-by-the-Sea and he knew he had to get the chance to photograph it.

“I found it while I was having a hamburger at American Legion Post 512, and I’ve been printing them ever since,” he added.

The majority of the 2,800 square inches of the 40-by-70 canvas is soaked in a deep sea blue, matching the color encircling the 13 stars just above the heart of the eagle. Jungroth added a white base with red text to highlight his “Veterans First” saying, the staple of his design.

“I’ve had Marines come up to me and say, ‘That is the most beautiful flag I’ve ever seen,’ and that’s something I hope to do, make flags from this design one day,” Jungroth explained. “Right now, the idea is to have permanent installation in our Veterans Homes across the state.”

Jungroth makes four sizes, including an 11-by-17 inch display, which is printed on aluminum. He plans to print roughly 1,600 copies, including the nine he’s already donated to the eight California Veterans Homes across the state and CalVet Headquarters in Sacramento.

He’s added a pair of prints at the Veterans Affairs/Department of Defense Outpatient Clinic and the Veterans Transition Center in Marina, California, and he intends to print more for other VA departments and hospitals around the country. 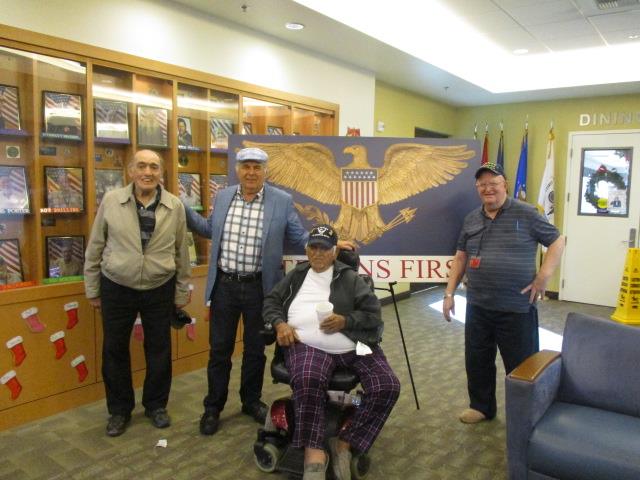 Veterans First creator James Jungroth poses for a picture with three veterans from the Veterans Home of California in Lancaster as he delivers a print to the Home.