She will lead CalVet’s Minority and Underrepresented Veterans Division, which advocates on behalf of minority and LGBT veteran communities, seeks to identify and address gaps in service, and supports activities that address the unique needs of these veterans.

“Liz brings a wealth of experience and a passion for serving veterans that will help to improve our outreach to minority and underrepresented veteran communities to ensure that every veteran receives the benefits they have earned,” said CalVet Secretary Vito Imbasciani MD. “We are proud to welcome her aboard.”

A Navy veteran, Perez, 39, served as an aviation logistics specialist from 1997 to 2005. Since 2010, she has been president and founder at GC Green Inc. She was a director in business development at Xnergy from 2007 to 2011 and a branch manager at Ferguson Contractors from 2005 to 2007. She was a member of the American Israel Public Affairs Committee Delegation in Israel in 2016 and a 2013 White House Veteran Champion of Change. 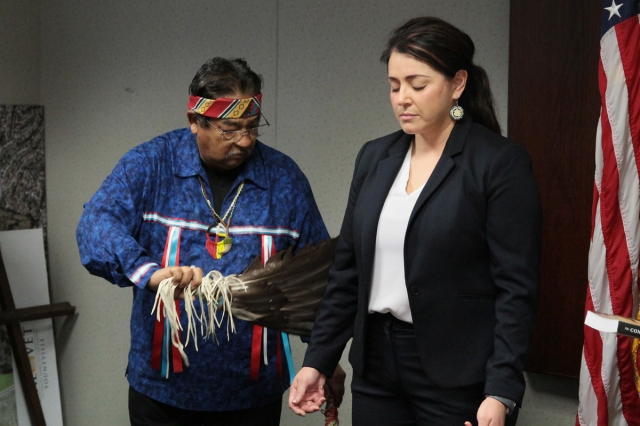 The swearing in ceremony for Elizabeth Perez included a Native American blessing to honor her Mono heritage. Pete Molina performed the blessing.