Drew Johns is a high school student in Redding, Calif. And while his school mascot is a hornet, Johns has always dreamed of becoming an eagle.

He recently achieved that dream, completing a major community service project that earned him the title of Eagle Scout – the highest rank in the Boy Scouts of America. His project will leave a longstanding and visible mark on the Veterans Home of California – Redding. 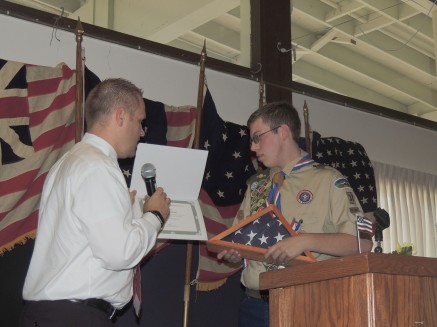 Skilled Nursing Facility Administrator Steve Cope presents Drew John with the flag that has flown at the Veterans Home of California in Redding and also in Washington, D.C.

Johns worked with community partners to create a memorial wall that will honor veterans who completed their lives at the home on Knighton Road in Redding.

The circular memorial wall sits in center stage beneath the flag poles, and features six-inch square plaques engraved with each veteran’s name and branch of service. The precast cultured stone wall is 32 feet in diameter, stands 30 inches high and is six inches wide. It can accommodate 500 plaques, allowing for expansion in the future.

This monumental achievement was the result of hard work, community support and a lot of personal drive. Johns, who has been involved with scouting since the first grade, comes from a family that includes a host of uncles, grandfathers and many others who served in the military. There was an outpouring of community support, beginning with the assistance of Kevin Butler of the Butler Engineering Group, Inc. and many other supporters. Johns received the necessary approvals and contacted the company that built the veteran’s home so he could match the cultured stone that highlights the home itself.

Johns, who has 40 merit badges to his credit, was honored as an official Eagle Scout and recognized for his endeavor by the Official Eagle Scout Court of Honor during a ceremony at the Redding Elks Lodge on Aug. 26. He is a Redding native and son of A.J and Lori Johns.

Thanks to his hard work on this ambitious project, the veterans home has a beautiful new feature that will serve to honor our veterans for years to come.