Teaming up with the Women Veterans Alliance and the City of Sacramento, CalVet recently celebrated the accomplishments of female veterans at their annual Women Veterans Reception in downtown Sacramento. The annual celebration was held at the Leland Stanford Mansion and served as the backdrop for four CalVet Trailblazer award-winners.

This award is given annually in recognition of women veterans who are truly a credit to veterans and to the branches of the armed forces in which they served. 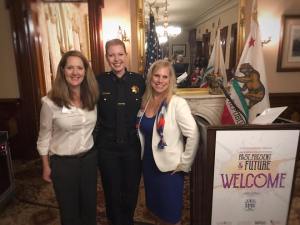 First established in 2012, sixteen distinguished women have received the Trailblazer award. They include women of extraordinary accomplishments, education, and life experiences including: a doctor, an attorney, several CEOs of non-profit organizations, the first female state commander of the VFW, a Brigadier General, a first-generation college student, a nurse, a 30-year career soldier, a centenarian,  a mother, a grandmother, the first female and the first African-American national commander of the DAV, and a holocaust survivor. Past awardees represent each branch of the armed forces and hail from all over the state of California.

Find out more about each of the award-winners below and check out highlights from the event in this video.

Ann Reeder-Duson – a U.S. Army veteran, Ann Reeder-Duson is the Founder and CEO of the Women Veterans Unity Group (WVUG), a non-profit organization that ensures the female veteran community has a continuum of resources by forging partnerships and collaborations with local, state, and federal governments. She is a certified addiction treatment counselor and earned her Associates degree and certificates in drug and alcohol studies, mental health studies, women studies, and is certified to provide resources for those affected by domestic violence.

Kathy Lester – Raised in Rancho Cordova, Kathy Lester enlisted in the U.S. Army after high school where she attended the Defense Language Institute in Monterey, CA. She served as a cryptological linguist (Russian) and was cross-trained as a combat medic and range master.   Kathy served both stateside and in Korea and Japan while attached to the 373rd and 368th Military Intelligence Battalions. In her military career, she has earned the Combat Lifesaving Medal, the National Defense Medal and the Meritorious Service Medal. She now serves as the Deputy Chief for the Sacramento Police Department.

Kiyo Sato – A U.S. Air Force veteran, venerated author and retired nurse, Kiyo Sato is the eldest of eight children born from a Japanese-American immigrant family who grew up on a farm in the Mather Field area of Rancho Cordova before World War II. She was 19-years-old when President Roosevelt signed Executive Order 9066 in February 1942, forcibly relocating Japanese-Americans from their homes. After the war was over, Kiyo and her family eventually came back to Sacramento to rebuild their lives and were one of the fortunate Japanese-American families to retain their land. She later joined the U.S. Air Force, completed a master’s degree in nursing and achieved the rank of Captain in the U.S. Air Force Nurse Corps.

Melissa Washington – A Navy veteran, Melissa Washington is the President and Founder of the Women Veterans Alliance (WVA) – the premiere network focused on directly impacting the quality of life for women veterans. She is a disabled veteran small business owner, speaker and author. After serving in the U.S. Navy, she earned her bachelor’s degree in business management and transitioned into a successful career in recruiting and human resources for more than 10 years, working for both boutique and global Fortune 500 companies. In 2011, she offered consulting services to businesses and individuals using LinkedIn for researching, recruiting, job seeking, and collaboration.