Introducing CalVet Newswatch, the latest veteran news from California and beyond, delivered weekly to your inbox and updated daily on CalVet Connect. Scroll down to view highlights of this week’s top articles, or click here to visit our site.

DALLAS MORNING NEWS — A 2015 study published by the American Psychological Association asked 327 female veterans in Southern California about their experiences with sexual trauma. They divided the respondents into two groups — those who served before the terrorist attack on Sept. 11, 2001, and those in uniform afterward. Nearly half of those in the earlier group reported sexual contact against their will during their military service. In the later group, reports of unwanted sexual contact dropped to 30 percent.

SAN DIEGO UNION-TRIBUNE — Another glass ceiling in our nation’s military was smashed today when a female second lieutenant became the first woman to graduate from the Marine Corps Infantry Officers Course. Because the infantry is the beating heart of the Corps and the most revered and influential group within the tribe, the significance of her achievement cannot be overstated. Despite its well-established legacy of tactical competence in combat, the Marine Corps has always served as a boat anchor dragging behind the rest of the services when it comes to social change.

NEWSWEEK — The suicide rate among women who have served in the U.S. military is more than twice as high as that of adult civilian women, according to new figures released by the Department for Veteran Affairs. The figures, published Friday, analyzed suicide data from the 50 states, plus Puerto Rico and the District of Columbia, for the 55 million people who departed the U.S. military between 1970 and 2014.

USA TODAY — As a retired rear admiral in the Navy Medical Corps, I have great respect for Secretary David Shulkin’s work for veterans, but his uncritical defense of the Veterans Affairs’ (VA) controversial dog research (in his column “Disabled veterans need research on dogs to continue”) is of concern. Throughout my career as a military physician, I worked to improve the health of service members and increase the efficiency and effectiveness of the military health care system. 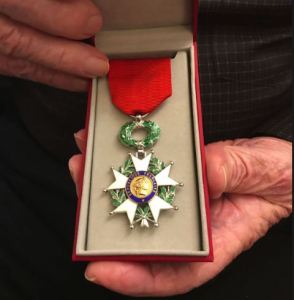 THE BAKERSFIELD CALIFORNIAN — Ten World War II veterans from Kern County and Southern California will receive France’s highest honor Tuesday at Los Angeles National Cemetery for their efforts in liberating France from Nazi occupation during the 1940s. It was the largest seaborne invasion in history, but U.S. Army Pvt. Henry Ochsner arrived in Normandy, France by parachute. It was predawn D-Day, June 6, 1944, and Ochsner, now a 94-year-old resident of eastern Kern County, was just 21 when his combat boots hit the ground near St. Mere Eglise with the famed Easy Company of the 101st Airborne Division.